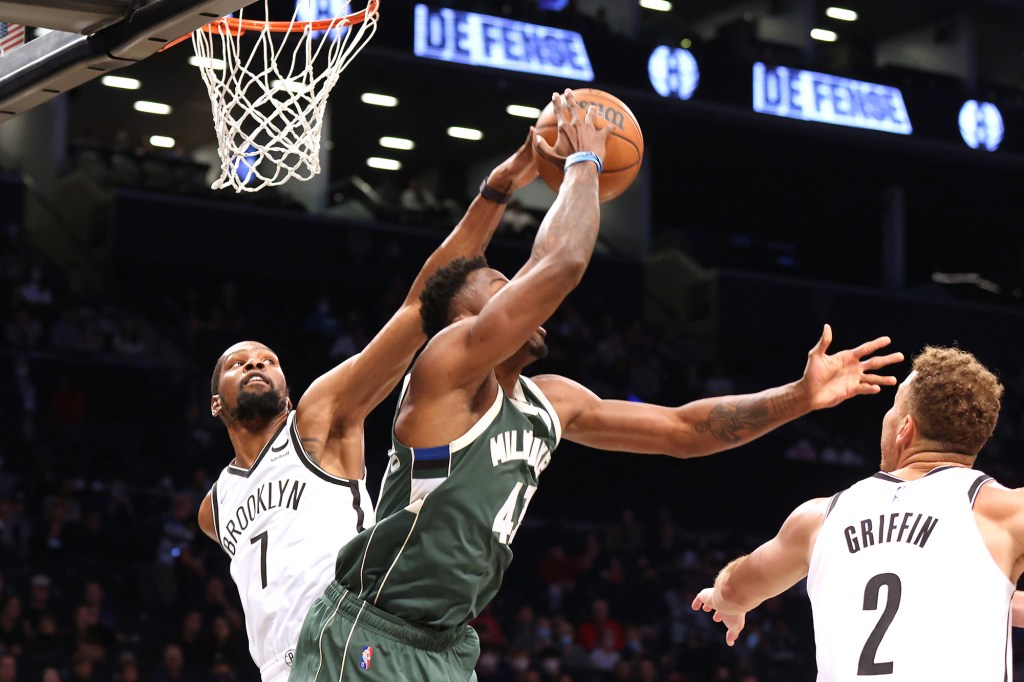 The Nets’ 119-115 win over the Bucks on Friday night was pure preseason, nowhere near a high drama rematch of their classic playoff series this past June. But the teams are developing the best rivalry in the Eastern Conference, and one of the best in the entire NBA.

The schedule-makers know it. That’s why the Nets will open the season Oct. 19 in Milwaukee the reigning champ Bucks versus the team favored to dethrone them. And this preseason game marked the first time the Nets had played at Barclays Center since their tough Game 7 overtime loss to the Bucks in the conference semifinals.

“There’s a chance for a rivalry to grow,” Nets head coach Steve Nash said before the game. “After you play in the playoffs, typically there is some sort of seeds of rivalry no matter how the series goes. But to have such a close series, then to go on to win the NBA championship, the two top teams in the East, I think that has plenty of legs to develop a rivalry. But I don’t think you’re going to see too much of a rivalry [Friday].”

Not with the Nets missing Kyrie Irving due to vaccine mandates and Paul Millsap due to health and safety protocols. Milwaukee was even more threadbare, playing sans nine players — including Giannis Antetokounmpo, Jrue Holiday and Khris Middleton.

Last season’s playoff clash was an instant classic that planted the seeds for a rivalry. Durant’s positional matchup with Antetokounmpo (both are former MVPs) watered those seeds, as did Irving’s season ending when he sprained his ankle during Game 4 of that series while landing on the Greek Freak’s foot.

Friday night, Durant had a Nets-high 18 points, six rebounds and three assists over 23 minutes in his preseason debut. James Harden — who suffered a Grade 2 hamstring injury Game 1 of that second-round loss, missed most of the series and spent much of the offseason rehabbing — looked rusty in his first preseason action.

Harden, who sat out Sunday’s preseason-opening win at the Lakers, had eight points on 3-for-9 shooting with four assists and three turnovers versus the Bucks.

But as sloppy as the replacement Bucks were with their ballhandling (20 turnovers), the Nets were even worse with their rotations. They flashed quick hands for some early steals in running out to a 23-11 lead on a Jevon Carter strip steal and layup. But their communication was lacking and their defense was a step slow.

Cam Thomas’ 19-foot step back put the Nets ahead 112-111 with a minute remaining and, after Mamukelashvili missed a 3-pointer, Thomas drilled one of his own for a four-point cushion with a half-minute left. The Nets never trailed again.

Signs of that budding rivalry? There was Milwaukee’s Thanasis Antetokounmpo (Giannis’ brother) sending DeAndre’ Bembry crashing to the court with a hard foul on a breakaway dunk. Thanasis tried to help him up, but Bembry rejected the gesture and even brushed away the Bucks’ hand when he offered an apology.

“I think [the rivalry] is relatively new. For us to meet in the playoffs, it was an incredible series. Both teams, to leave it all out there in Game 7, go to overtime,” Bucks coach Mike Budenholzer said. “So much respect for the players, the coaches, the entire organization. We hope to be a team that’s competing to be the best in the East and the best in the NBA, and I know that that’s the same expectations for Brooklyn.

“As you play in the regular season, those games probably mean a little more to their players, to our players, fans, everybody. But you’ve got to take them as they come. It doesn’t change that much. But there’s just a ton of respect. Usually rivalries start with that kind of respect. We look forward to playing them … just a lot of respect for their talent and what they do.”